Why did I go to Visual Studio Live?

Well, I do find value in solving business problems with a proper typed language. Even if at the moment, I mostly write JavaScript.

A few years ago, I worked at a .net shop as a front-end dev, but I was the guy that preferred Mac OS and Linux servers. I would build small tests on my Mac at night using .NET Core 1.0 and React. It would mainly be small APIs with JS front-ends, or building out multi-page sites with razor in the views, nothing major, but I was interested. It seemed to satisfy the need of learning something new for personal gain, not production.

I appreciated the fact that Microsoft finally open sourced something to increase their developer base beyond corporate America, and I thought thought it had a future. Enough of the history.

I’m immediately thrown into an Egyptian cabby vs. Egyptian cabby "I kick your ass at backgammon every day at lunch" argument at a stop light. It made my day, and was entertaining. Two complete characters that have a bond even though they are halfway across the world together now, and I haven’t thought about backgammon since I played it as a child in the 80s. Kinda cool!

I pull up to the Swissotél at the end of Wacker drive, I’ve never been inside there before, but the impressions on arrival were good, and I was 15 minutes early!

I get checked in, get a complimentary backpack, and buy a polo, even though I'm not a polo guy. I thought it was odd that all the other conferences I’ve been to have t-shirts and the Microsoft conference had Polos. (: I bought one anyway, but I still refuse to wear khakis. I scoped out the coffee and breakfast sandwiches, and found a seat. I then realized I was in a sea of Microsoft fans.... 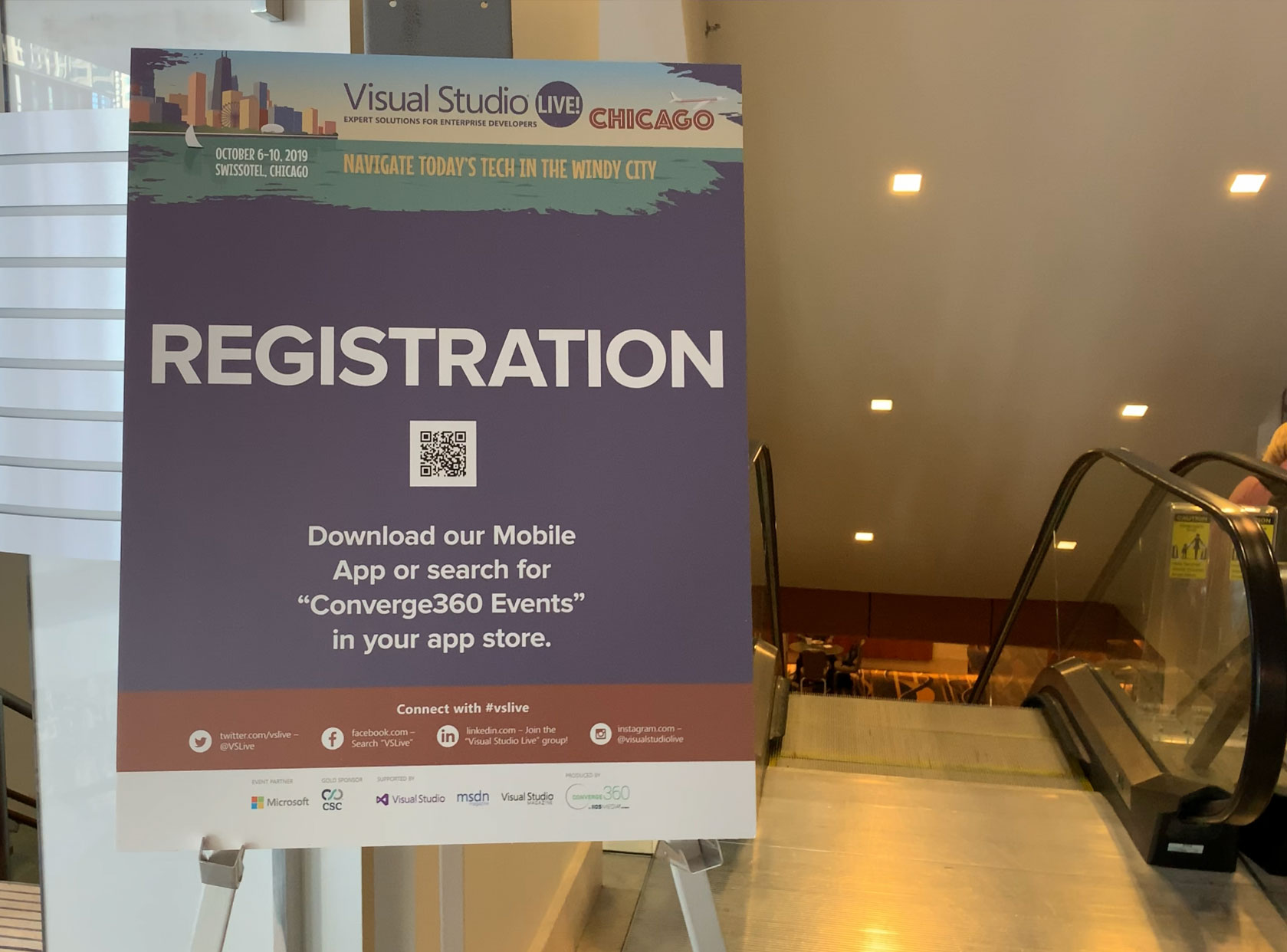 So, what’s the agenda for the day? It was a full day workshop called "Develop and ASP.NET Core 2 App with EF Core 2 in a day."

The presenter was a guy named Phil Japikse who has authored tech books on the Windows stack, runs a consultancy etc. He seemed like a really nice guy from my talks with him on breaks. I appreciated the fact that he spent almost two hours explaining the upgrade path and versioning of this whole .NETCore thing to all the attendees. Some had apps in production not using the .1 LTS versions, and most seemed like they weren’t really sure where this whole thing was going in the future, but we’re finally willing to give it a shot. His lengthy description and breakdown of how they can move forward seemed to clear up a ton of confusion. 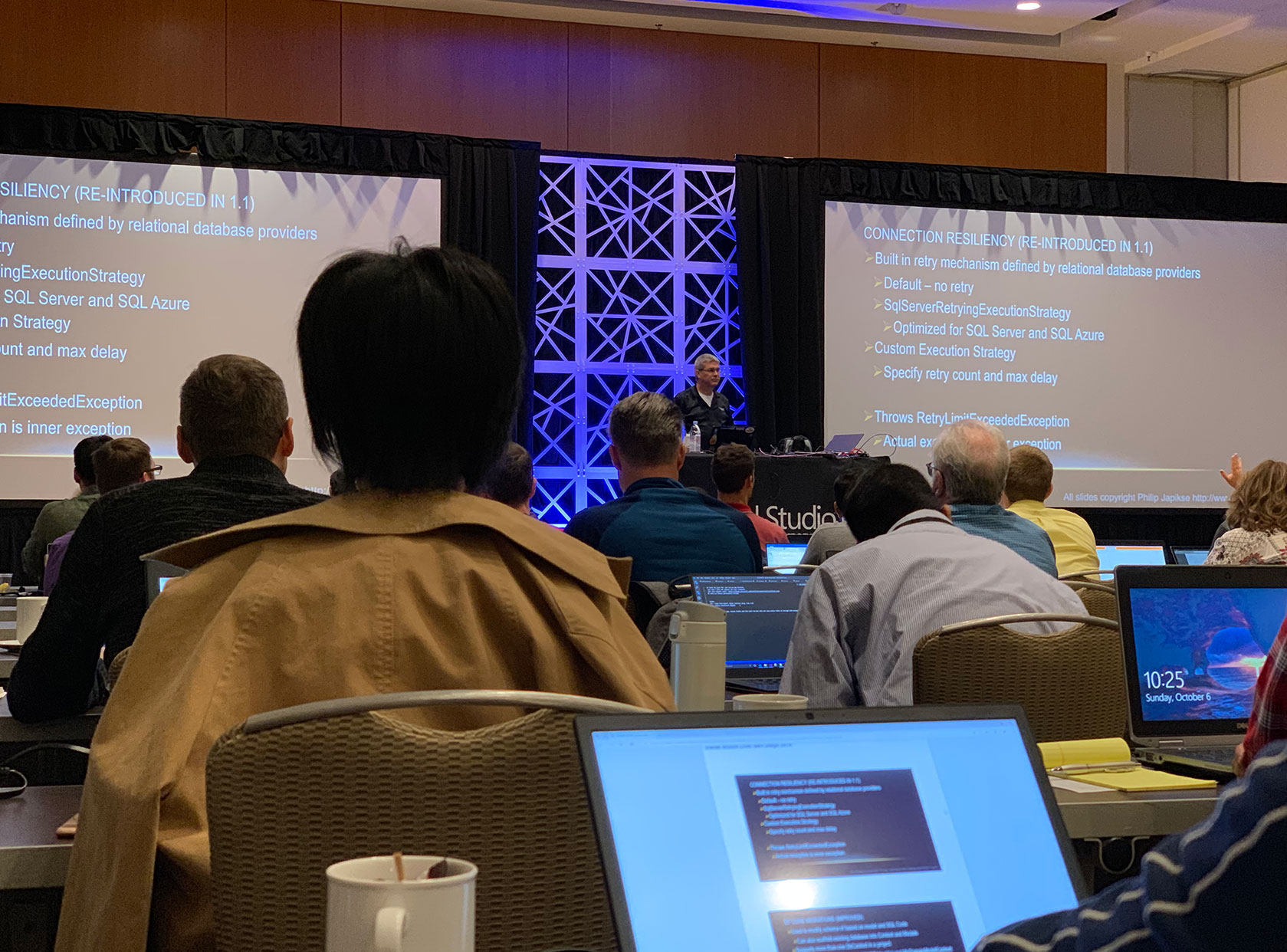 Most of the Microsoft stack devs I have worked with in the past have seemed leary on where this was going, and didn’t really care to explore it because it was some open source thing that worked on other operating systems, and they were content just using MVC 5 for the rest of eternity. I always found that odd, but in a way, this whole .NETCore upgrade path thing seems kinda like the volatile nature of the JavaScript framework ecosystem, or like the Angular version thing that makes people not want to use it anymore. So, it makes sense on why I’ve heard things like that be mentioned.

The day as a whole went well, and I learned quite a bit. It’s something I’ll probably continue to learn more about, as I do feel there is definitely a need for this. It seems Microsoft’s main intention with this was to try and get more developers that have jumped ship to more modern stacks to switch back, and improve the server cost thing by allowing apps developed on the platform to be able to run on other servers instead of just IIS, which is really what intrigued me over the whole thing. I tend to look at the architecture and monthly costs, That will accrue from a standpoint of a small business site, rather than thinking of things from disposable budget and Windows servers everywhere point of view.